How to bake with Bundt cake tins

A Bundt cake is any cake baked in a Bundt cake tin. It’s that simple. Except that it isn’t. We thought we’d explain how to bake with Bundt cake tins, given their increasing visibility in modern baking.

A quick history lesson: The Bundt cake originated in part from a European brioche-like cake called ‘Gugelhupf’. It was popular among Jewish communities in parts of Europe. Bundt cakes are not associated with any particular recipe. They are associated with the style of cake mould, which became popular in the USA in the 1950s and 1960s.

All cakes should be delicious, but the interesting shape of the Bundt tin means you can have a lot more fun than with more traditional baking trays.

A Bundt cake recipe will describe the tin buy the amount of batter it can hold. If you overfill your Bundt cake tins then it might overflow in the oven (messy). If your tin is too large and you don’t have enough mixture, the bake won’t fill the tin and it won’t make the most of the lovely shape!

If you are buying a new Bundt cake tin then in theory you should know its’ volume. If, however, you’re using a Bundt tin which has been in the cupboard or the family for years, it is worth taking a few minutes to fill it and measure it. Don’t guess! 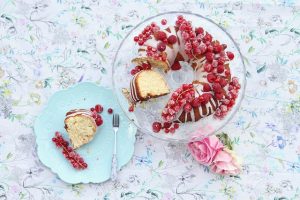 Silicone moulds are attractive and popular, and we would agree this material can be perfect for smaller bakes. When it comes to Bundt cake tins, however, they are a risk because of how flexible they are. There are glass moulds available for Bundt cakes, but we’d recommend avoiding them as they don’t conduct heat as evenly as metal.

We would recommend durable, light, non-stick metal Bundt cake tins. They have even heat conduction and the non-stick surface allows for easy removal from a tin which has lots of crevasses. Essentially, a Bundt cake tin is one giant trap whose objective is to make your cake fall apart. Therefore, you need to choose wisely!

Bundt Cake Tins: Make sure you coat the tin

So, we’ve just said a non-stick coating is essential, and now we’re talking about coating it as well? Look, you’re probably never going to bake a cake in anything more intricate. Do you really want to take any chances? By making sure the tin is greased, you stand a better chance of removing intact. 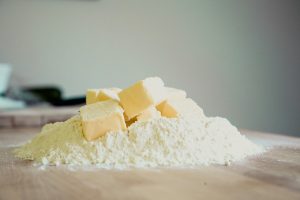 We would recommend coating the inside of the tin initially with butter, then flour. Shake the pan around until the butter is completely covered by flour, then tap put any excess flour. The flour will allow the batter to grip the inside of the tin so you get a good rise, and the butter will allow for an intact bake. Using something like non-stick spray or sunflower oil will not allow the cake to rise as well.

The cake batter needs to have room to expand without going over the top. In theory, if you have the right Bundt cake tin for the recipe and follow it to the letter, you shouldn’t have a problem. Nonetheless, it is worth knowing that as a general rule of thumb the cake mixture should fill about two-thirds of the tin.

You’ve worked really hard up to this point, and if you’ve followed all the above steps and recommendations you stand a good chance of a successful Bundt cake. Hold your nerve at this point!

You’ll need to give the cake the time to rest before you begin to release it from the tin. A rest of about 10 minutes is required for this complex-shaped cake to detach from the inside of the tins. By turning the tin over, gravity will also help!

A great tip is to turn the Bundt cake tin over onto a cooling rack rather than a plate. This should mean the bottom of the cake has more air to it as the cake cools, and you are less likely to suffer a soggy bottom – which no-one wants!

We recommend these Amazon bestsellers:

What are the best baking trays for cupcakes?

How to bake with loose bottomed tart tins

What Are The Best Easter Baking Accessories?

We’re a family-run baking website full of recipes, news and shopping recommendations for baking gifts and accessories for all budgets and all occasions. As an Amazon Associate we earn from qualifying purchases – so if you do buy any products via our site, thank you very much. It will mean we can buy some more flour!